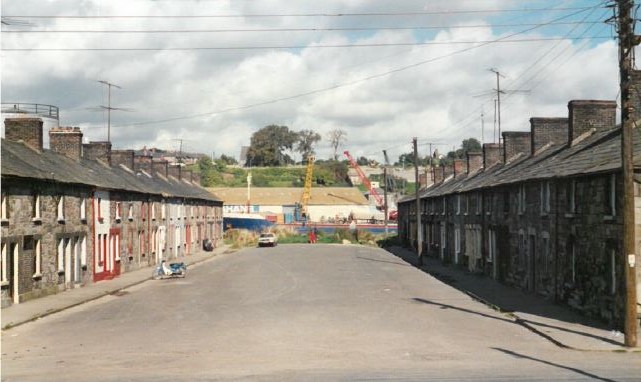 Upstate Theatre Project return to the place of their 2012 site-specific performance ‘Ship Street Revisited’. The performance involved a cast of fifty performers from the Drogheda community from 10 years of age to the upper reaches of adulthood. The project was directed by Paul Hayes and scripted by Aidan Harney based on the oral history archive collected by Drogheda Local Voices.

“Fantastic depiction and so professional, I came away and am thinking about it since”

On this occasion Upstate is beginning a process of engagement that will investigate the role of an arts organisation, obviously in collaboration with numerous stakeholders, to realise a more direct impact on the living environment that makes up Ship Street.

futurepastpresent is the introductory phase of this process. It is the result of initial conversations with former and current residents of Ship Street. Upstate has worked with local visual artist, Rodney Thornton, to respond to the photographic history of the street with images generously loaned by former residents as well as photographs from award winning local photographers, Des Clinton and Patsy Reilly. Rodney reconfigures the presentation of the photographs and adds his own flavour with murals along the terrace. The street will also play host to ten listening chairs that allow you to sit and listen to compilations of the recordings about growing up in Ship Street, working in the local factories, fishing on the Boyne and boat building in the street.

We invite you to join the conversation in the open air gallery that Ship Street will become on Sunday 18th August between 3-5pm.

If you are interested in hearing more about the progress of the project please contact us on admin@upstate.ie or https://www.facebook.com/upstatetheatre

Upstate Theatre Project collaborating with people from Ship Street, and others on investigating the role of the arts in community development context. This is not a new role for the arts and community-engaged arts in particular has a long and illustrious history across the globe of successful interventions using artistic and aesthetic methodologies. The list is old and long and includes Welfare State in the UK, Cornerstone Theatre Company in the USA and Big hArt in Australia among many, many others. Upstate Theatre Project wishes to explore this tradition more closely.

There are artistic partnerships and projects that in many ways reflect the Ship Street situation that we have collectively begun to research and investigate. Among them is 2Up2Down in Anfield, Liverpool, where Dutch artist, Jeanne van Heeswijk, is collaborating with local residents to restore the area left partially derelict by a failed urban development programme. Across the city in Granby 4 Streets, the residents teamed up with multi-disciplinary collective, Assemble, which brings together architecture, design and art. Their collaboration won the Turner Prize in 2015. These projects created, as an outcome of their collaboration, affordable housing by renovating abandoned, derelict buildings.

None of the above should be surprising. The approach of these projects, and many more besides, is to consider the difficulties from different perspective and seek out solutions aside from the normal fashion that we can often get trapped into believing is the only way to do things. Architecture is a discipline of the arts that marries aesthetics and function in more and more exciting ways melding planning, engineering and artistic vision into aesthetically inspiring spaces both private and civic. The current residents of the street are, in some ways, doing just that as they renovate and re-fashion the interiors of their houses to suit their own personal aesthetic vision and need.

futurepastpresent is an invitation by Upstate Theatre Project to begin a conversation. That conversation began with former residents of the street whose knowledge and experiences inform our current investigation into what has been, is and could be, the reality for the street. Working with local visual artist, Rodney Thornton, we have brought the open gallery and audio installation together to begin a sharing of experiences and the beginning of gathering ideas that can shape the direction for the project over the coming years. Feel free to share your personal ideas through the Facebook page,  www.facebook.com/upstatetheatre , email, admin@upstate.ie  or contact us by phone, 041 9844227.

The project seeks to generate conversations with

an imagining of what Ship Street could look like in the future courtesy of Almos Barath. Resident of Ship Street.

On August the 18th 2019 Upstate Theatre Project presented the first public manifestation of conversations on the subject of Ship Street, its past, present and future.

Upstate also worked with local visual artist, Rodney Thornton, to respond to the photographic history of the street with images generously loaned by former residents as well as photographs from award winning local photographers, Des Clinton and Patsy Reilly. Rodney reconfigured the presentation of the photographs and added his own flavour along the terrace. The street also played host to ten listening stations where people stopped  and listened to compilations of the recordings about growing up in Ship Street, working in the local factories, fishing on the Boyne and boat building in the street.  We also invited the former residents, with all their experience of living in Ship Street to  look to the future as well.

In addition to the audio, and  the visual we will be adding to the page we have also published the programme which contains a general vision for the project, a wonderful account of how Almos Barat came to live in Ship Street and our tribute to Josie Judge, one of Drogheda’s most highly regarded citizens. Crucially it represents the beginning of the conversations. The conversations with former residents were edited into a ten audio works that are now available to listen to below. The conversations have only begun and we welcome interest in developing ideas for the street’s future.